It may be too much to ask of professional athletes to take on the role of real life heroes, but when sporting icons make a gesture, the effects can often be far-reaching.

Taking a knee to highlight the Black Lives Matter movement is the biggest recent example of athletes advocating empathy beyond the playing fields. The red poppy is worn in English sport annually as a symbol of remembrance and tribute to the armed forces.

Australia cricketers joined the band on Friday, swapping their traditional yellow-and-green by wearing a predominantly black jersey adorned with intricate aboriginal patterns in orange and yellow. 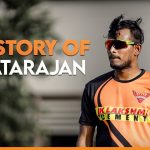